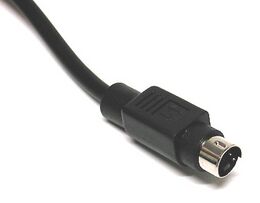 S-Video (also known as Y/C) is a baseband analog video format offering a higher quality signal than composite video, but a lower quality than RGB and component video. This mid-level format divides the signal into two channels - luminance and chrominance.

S-Video signals tend to degrade considerably when transmitted across more than 5 meters of cable. For long distances, component or composite video may provide better quality.

Today, S-Video signals are generally connected using 4-pin mini-DIN connectors using a 75 ohm termination impedance. There is also a small rectangular 'key' near the bottom of the connector, to help prevent incorrect insertion. The pins in the connectors bend easily, hence care must be taken when plugging the cables in—otherwise a pin is likely to bend, causing the loss of color, corruption of the signal, or complete loss of the signal.

Before the mini-DIN plug became standard, S-Video signals were often carried through different types of plugs. For example, the Commodore 64 home computer of the 1980s, one of the first widely available devices to feature S-Video output, used an 8-pin standard size DIN plug on the computer end and a pair of RCA plugs on the monitor end. Also, Sony's 3/4" U-matic format machines can transfer Y/C over a proprietary 7-pin connector commonly referred to as a "DUB" connector.

Today, S-Video signals can be transferred through SCART connections as well. However the SCART connector must explicitly support S-Video as it is not part of the original SCART standard.