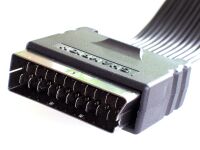 Motivations and applications for SCART

Before SCART came, consumer TV sets did not offer a standardized way of inputting signals other than RF antenna ones, and even antenna connectors differed between countries. Assuming other connectors even existed, devices made by different companies could have different and incompatible standards. For example, a VHS VCR could output a composite video signal through a German-originated DIN-style connector or through an American-originated RCA connector.

SCART attempts to make connecting video devices together much simpler, by providing one plug that contains all the necessary signals, and is standard across different manufacturers. SCART makes connecting such devices very simple, because one cable can connect any two SCART-compatible devices, and the connector is designed so that you cannot insert it incorrectly. Devices with multiple SCART connectors can pass the signals unchanged when not active, which allows daisy-chaining of multiple signal sources into a single TV socket. The voltage levels are pretty high, around 1V, so the signals are effectively immune to noise.

SCART is bidirectional regarding standard composite video. A television set will typically send the antenna signal to the SCART sockets all the time and watch for a returned signal, to display it instead. This allows to have "transparent" set-top boxes, without any tuner, which just "hook" and process the television signal before it gets displayed.

The standard has been extended at the end of 1980s to support the new S-Video signals.

Note that there are quality differences in SCART cables. While a proper SCART cable would use miniature coax cables for the video signals, cheap SCART cables often use plain wires for all signals, resulting in a loss of image quality and greatly reducing the maximum cable length.

To non-destructively verify if a SCART cable uses coax cables, unscrew the strain relief at the SCART connector and fold open the plastic shell.

SCART Pin-out, (*) marking an extension to the original standard:

Pin 8 is a signal from the source that indicates the type of video present.

D²B (Digital Data Bus) is an IEC standard for a serial communication bus. It is a multi-master bus for home automation, and was originally developed by Philips in the 1970s.

Game consoles which use SCART